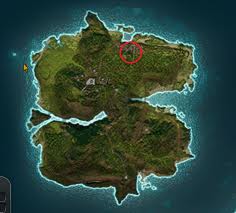 There is an island located on the top left hand corner of the map that has many references to the popular TV show: LOST. On arrival to the island (if Ular Boy's mission "Stranded" is not completeld), anything you are flying in or any boat you are driving will catch on fire and crash and almost immediately after you enter the island it will start to rain; there is also a crashed aeroplane located near the beach.

Smoke Monster
He can't be seen in most parts of the island, but will spawn when you go to the approximate area: X:2170; Y:1420. Some also
claim that you can hear the Smoke Monster sound effects while walking through the jungle.
He appears as a Panau Elite Soldier and is followed by a cloud of smoke. He will never attack you but will try to follow you wherever you go on the island.
He'll get into your car but not into an aircraft. The Japanese soldiers don't seem to like him. They won't shoot directly
at him, but you can't get rid of a Japanese heat level, as long as you're with him.

Japanese Soilders
There are hostile WWII Japanese Military soldiers spread throughout the island. They have a network of towers, bunkers and sophisticated ellectrical systems that connects to a mainframe EMP tower.

Though not much of an Easter egg, there is a hot air balloon which you can ride. It is located at these co-ordinates: X:7392, Y:16151. To ride it, you must shoot the 4 sand bags at either side, and then jump into the basket. Then you press Y/Triangle which lights the burner, to actually control it, you must rapidly tap Y/Triangle and run into the direction which you want to travel, although it is quite slow. If flown over the LOST Island, you will hear the sound of the crash, and a helicopter propeller will fly randomly away, though you will not crash. 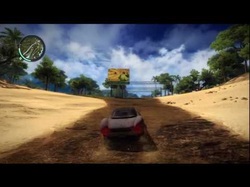 A race track with sport cars and motorcycles can be found at: X:9170; Y:11413, at the settlement of Bandar Selekeh. Multiple cars can be seen driving around the track. The cars are driven by soldiers from the three different factions. Near the pit stop area there are two garages, one of them is occupied by a Mancini Cavallo 1001. This race track is on the civilian village Bandar Selekeh.

Dirt road race tracks
At X:11262; Y:4147 there's a large bumpy dirt road race track that crosses the nearby highway. It's similar to but more complex than the race track at Bandar Selekeh, featuring two jumps, shortcuts, crossing levels and varying terrain. Because the road is made of dirt it's almost impossible to spot the track from the PDA map.

There are two Titus ZJ's and a few gas depots. Titus is a great car for street racing but almost useless on the bumpy terrain so it would be a good idea to steal an ATV or Jeep from the nearby highway to use in raceing. The race track takes about two minutes to complete and jumps across the highway at two locations. It's a very hard track and you need speed at many times due to large ramps you must take to continue the track.

There's another dirt road race track at about X:29800; Y:15800, but there's no vehicles there. Only a billboard of Pandak "Baby" Panay. There's also a large natural ramp, that doesn't lead anywhere. 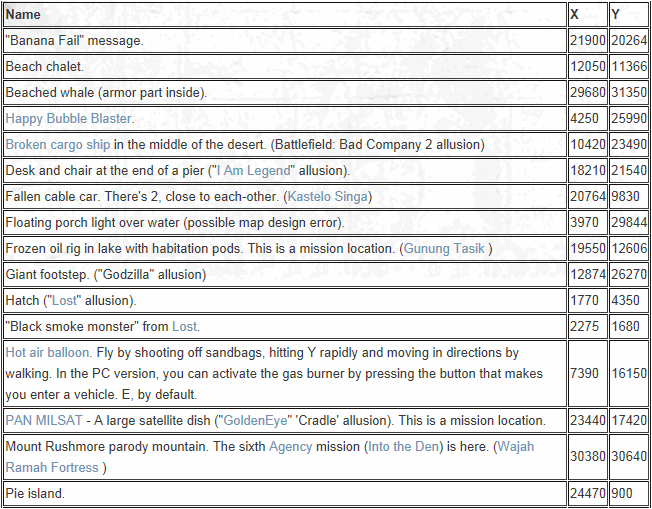 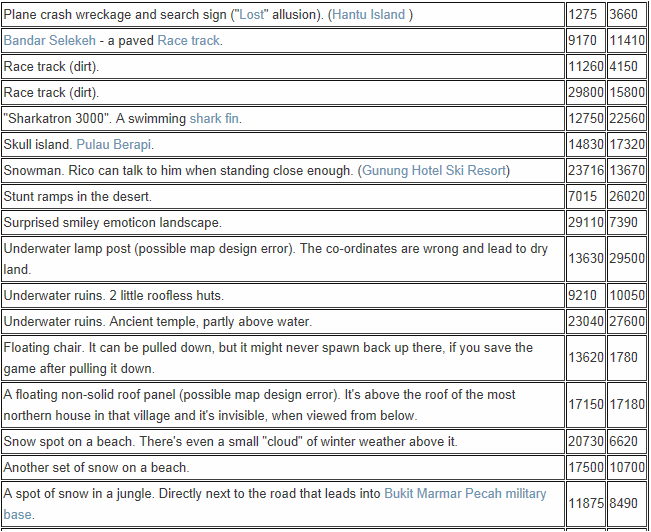